A while ago I was working on a system that would allow me to manipulate remote objects as if they were local to me.  In other words, I wanted to use commands like “setDamage” or “setVelocity” on objects that were created by the server. I found that vehicles were the easiest to manipulate the locality of. I remembered that vehicles change their locality when a player enters the driver seat in order to prevent rubber banding from occurring on the driver.

So, lets say we wanted to kick someone out of a driver seat and move ourselves into it. ArmA 3 has a great command called “moveOut” which lets us kick remote units out of vehicles. Moving yourself into the driver seat is just as easy with the “moveInDriver” command.

In the end I came up with this code. It works like this:

We do this for every vehicle and can use local commands like setVelocity on vehicles that are not (were not?) local. 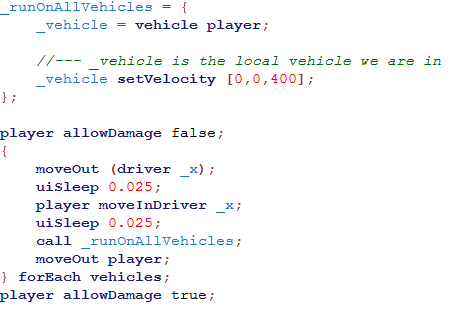 Manipulating vehicles locality should really never need to be used in this fashion. This is just a neat idea I came up with when exploring some bugs within the games networking.