So recently I purchased a Screamer PCIe from LambdaConcept. Personally, I would not recommend buying one of these as two of the three cards I purchased were dead on arrival. However, thanks to the one device that did work, I have been given an opportunity to once again approach attacking the Arma 3 engine from a C++ perspective.

The first thing I wanted to do with it was arbitary SQF execution in Arma. This is a bit of a challenge, as I can’t allocate any memory via DMA. So I had to come up with a unique way to execute an arbitrarily large script without allocating memory for the script code to go into.

In order to execute SQF via memory, there are only a few approaches that are decent. GameState::Execute and OnEachFrame are my two favorite methods. The first method requires we call the Execute virtual function in the GameState object. Doing this over DMA is tricky, as we can’t create our own threads or allocate our own code. OnEachFrame is a lot simpler. By writing a GameDataString (Or GameDataCode!) pointer to a global variable, the engine will execute our code every frame.

So we’ll be using OnEachFrame for our exploit. However, this still begs the question, how can we construct an object for our code to go into?

Well, there are actually a few ways to achieve this. Here is one example:
Have the cheater open 3DEN and define their script like this:
Now we can use our DMA device to find the GameDataCode pointer for that variable. By bumping its reference count by 1, we ensure it’s not released when we leave 3DEN. Now we can join a server and simply push that pointer onto the onEachFrame value and walla!

This works, but it requires user input. I created a technique for executing arbitrary code without requiring any user input and a very limited scope for SQF based anti-cheats to detect.

First, we need a buffer to write our script into. Thankfully any existing GameDataCode variable contains an ArmaString pointer to its value. So when I run str(var) this ArmaString is what we see in the output. 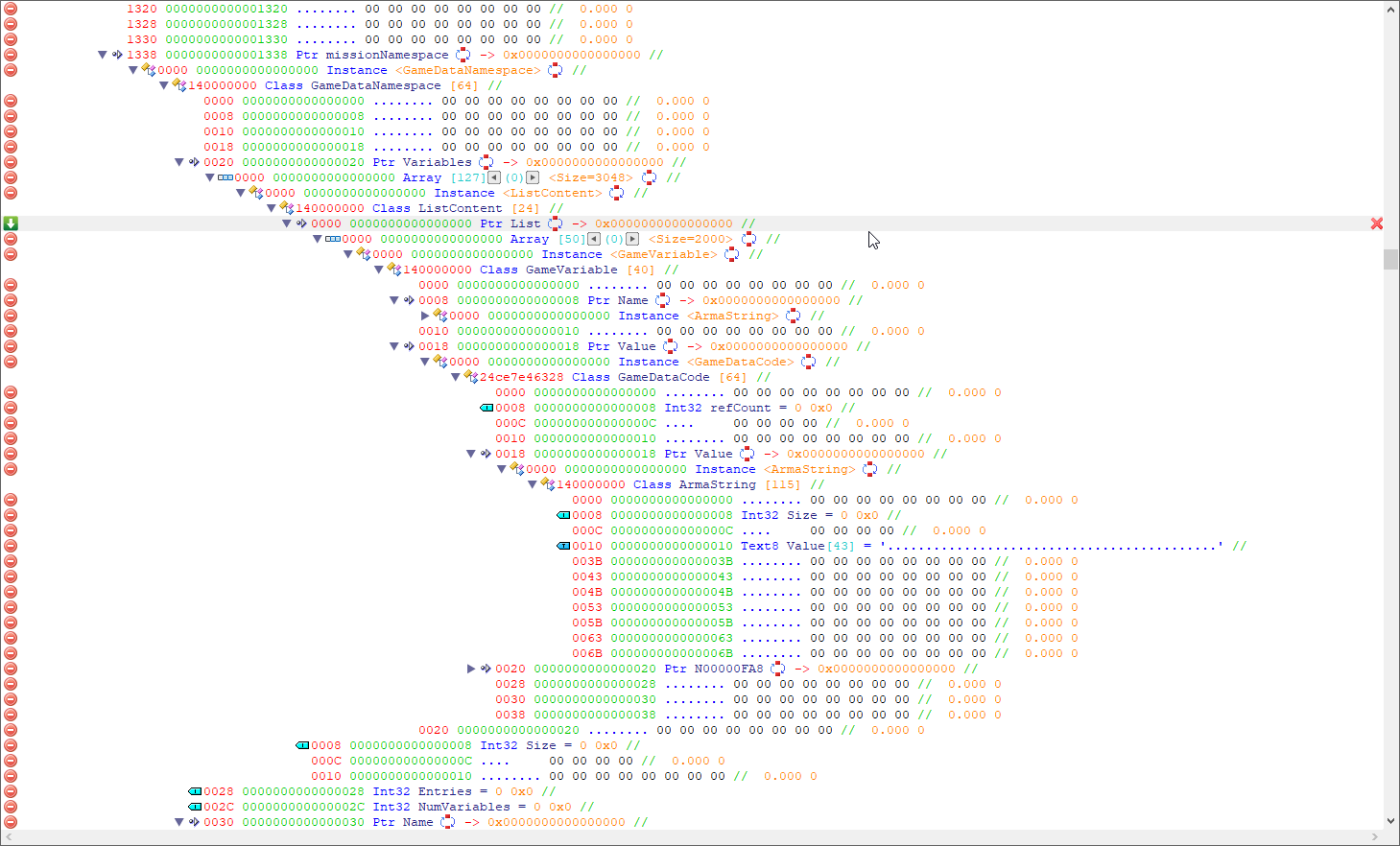 Using a variable in the uiNamespace such as BIS_fnc_diagWiki, we have a large buffer we can write with our script into. This string, however, is not used for GameDataCode execution. We can’t simply modify this and stick the GameDataCode pointer into onEachFrame. So we need to find a GameDataString variable that can be used. I will leave finding a string variable in the uiNamespace as an exercise for the reader.

Let’s jump right into the C++ code for this and explain what is being done step by step.

Second, we need to identify the internal ArmaString value pointers for these objects. One of these two values will be where our attacking sqf code is written to.

Next, we need to be on the safe side and ensure our ArmaString buffer is large enough for our script (otherwise we need to pick a new SQF variable).

Now comes a very important step. When we write our attacking script we need to add “filler” sqf that will ensure our code matches the size of our original string. If we do not do this, Arma will automatically resize this string and bad things will happen in future steps. You may notice the minimum_extra_chars variable from above, this comes into use here.

Above we assumed that our GameDataCode buffer would be larger, but that may not always be the case. If our GameDataString is larger, we can just write to that.
However, if our GameDataCode is larger we need to swap the internal ArmaString pointers. This is like doing stringvariable = str(codevariable); (kinda).

Finally, we get to write our attacking SQF to the GameDataString’s (possibly new!) ArmaString pointer. We need to read out the original code for future steps here.

Okay! Time for a break. At this point we have a string in SQF that contains our attacking code without allocating any memory. We’ve achieved part of our goal. Next we will execute this code using the OnEachFrame method Douggem outlined.

Firstly, we will need the original onEachFrame value. We’ll reset this pointer when we’re done to ensure we restore the game’s state.

Lets discuss a bit about Arma reference counts. Every GameData object has a count for the number of references to it. When the game is done with the object it’ll call the Release() virtual function. This will decrement the objects reference count, and if the count drops below 1, it will free the memory. When we change the value of OnEachFrame, the previous value is Released as well. So in order to keep our game from crashing if OnEachFrame is changed in the future, our custom value needs to have it’s reference count incremented by 1.

So our next job is to bump the refernce count of our GameDataString variable. This reference count is stored 8 bytes in.

Okay, now our GameDataString variable is ready to go into OnEachFrame!

If you were paying close enough attention you’ll have noticed I added something else into the injected payload. After our custom SQF executes, the code onEachFrame {}; is run. This will wipe out our custom onEachFrame code, but most importantly it makes it so we can detect once our custom SQF has completed execution (or if it has an error!). By reading the OnEachFrame value’s internal ArmaString pointer, we can see if onEachFrame was cleared.

Awesome! At this point we know our sqf was injected and executed. From here, we can go about restoring the game state such that no one will have ever known we executed something. I am kinda tired of creating all these gists, so here is that restoration code:

So now we’ve executed our custom sqf without allocating any memory! Very cool. Finally I want to give my closing thoughts on detection vectors for this approach.

By restoring our game state, we made it so there are no artifacts from executing our SQF. This makes it extremely difficult for sqf based anticheats to detect. I think that detecting something like this really just isn’t feasible, but it’d be possible to try and synchronize some variables between onEachFrame and MissionEventHandler “EachFrame” to see if they fall out of sync (and thus detect that onEachFrame missed a frame or two of execution).

In reality, I think the best way to detect something like this is by detecting the SQF cheat being executed. You can’t rely on BattlEye Filters because the cheater who is using this execution method probably disabled those anyway.

Anyway, I thought this was a neat trick as most people just allocate space for these things or use gamestate::execute. I am excited to showcase some more things in the future like ways to bypass SQF no-recoil detection.

Here is a video I did on the topic. This provides a much more visual way of comprehending what I just wrote.

Having AI run after and kill you.